Moving from Nottingham up to Baldersdale, was not without its challenges!

We had realised from an early stage that a large removal lorry was not an option for our long narrow drive with overhanging trees. As we had been driving up from our rental property most weekends in any case, we had been travelling with a trailer and gradually moving our belongings in stages. We therefore decided to “move ourselves” using our own trailer and a Luton van hired for the weekend. How hard could it be?

The week before we were due to move the first problem struck, when the Freelander we were using to pull the trailer suffered a catastrophic engine failure on the A1 and was subsequently deemed an insurance write off. This was not only a cost we could do without, but also meant we had to quickly get a tow bar fitted to our other car.

After several trips up and down the A46, A1 and A66 we had moved the bulk of our belongings and stored them in our barn which had a more weather resistant roof than the house. We returned the hire van, and just managed to squeeze in our final bits and pieces in the car, two cats and a box of cleaning products that we’d used to tidy up the rental house before returning the keys.

On our very last leg of our move trip up to County Durham, we were on the A66 when the second problem struck and we got a puncture. Luckily Mainsgill farm shop was closed so we could pull into their car park, and proceeded to empty the car boot and retrieve the spare wheel. Thankfully we managed to change the wheel just before it got dark, and hastily repacked the boot.

The weekend we moved took 3 trips with the hire van, our car/trailer, my Dad’s car, and an additional final trip in our car alone. Even with the van hire cost and all the diesel, it was significantly cheaper than paying a professional removal company.

It was a very long and tiring weekend, but we managed it without any breakages (people or belongings), and many thanks to my Dad for providing much needed extra muscle.

Suzy’s Mum and Dad bravely arrived a few days later and helped move boxes around, clean and make some very dubious electrics safe. So a big thank you to them both. 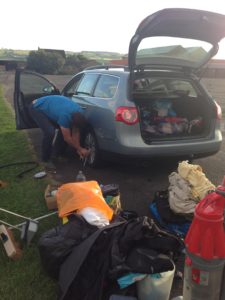 So the place was officially ours, and the real work was only just starting!