One of the first rooms to work on was a new utility room. The estate agents listed an outhouse as the utility room in the sales particulars, but we were keen to have a space that you didn’t have to venture outside to access!

Our kitchen was eventually going to be quite open plan, so we were keen to have a separate utility to hide the clutter, and close the door on a noisy washing machine or tumble dryer.

The first task was to remove an internal brick wall that had no foundation, so we could lift up the existing floor. This area of the house was a more recent extension, so ironically we were removing the newest timber floor in the house. The timber joists were in good condition, so they will be kept for reuse elsewhere. The earth below the floor had to be removed so we could install a new insulated concrete floor, with a proper damp proof membrane (DPM) to comply with the Building Regulations. We were going to use the room as a pantry, so didn’t need underfloor heating to keep it warm. We though a radiator would be more controllable, and sufficient for occasional use on very cold days. This meant we could just insulate below the concrete slab and didn’t need a screed where the underfloor heating pipes would be laid.

We also needed to build a new blockwork wall to separate the utility room from the wet room, so we had to excavate even further to create a concrete footing for the new wall. To help noise attenuation even further we chose very heavy dense concrete blocks, so apologies again to my Dad who volunteered to lay them. This new wall was also tied into the existing gable wall using a metal wall starter, acting as a useful buttress for the external wall which catches the often extreme prevailing wind.

Whilst chopping off plaster from the walls, we discovered a nice stone fireplace that had been blocked up. It would be nice to retain this feature, but we also have to try and insulate the wall around it somehow and reduce the cold draughts.

The main reason the utility was a priority however, was somewhere to position the heat exchanger for ground source heat pump. After much discussion with the installer, we decided against fitting the heat exchanger in the barn and potentially losing heat from the underground pipework back into the house. A Nibe unit was recommended to us as it was a quieter model than most. We planned to install the unit in a cupboard however to contain any noise, in addition to the utility room door itself. All doors will also be fire doors, which are much more solid than a standard interior door and better at deadening noise.

The pipework from the manifold chamber buried in the field, comes up through the floor and is connected to the heat exchanger. This in turn is connected to a hot water cylinder for our domestic hot water, radiator circuit (for the first floor), and also a manifold for the (ground floor) underfloor heating.

We would eventually rewire the whole house, so we also decided to locate the new consumer units in the utility room. This will mean we have to keep cable routes open for some time though, as we add new lights and power points in stages.

Once the concrete floor was laid (thanks again Dad), we started lining the walls with timber studs to take insulation, hide pipes/cables, and eventually a plasterboard finish.

At this point we had to finalise the first floor bathroom layout, and this was going to be directly above the utility and we needed to consider where we would need hot/cold water supplies as well as drainage pipes.

The first floor construction above the utility was not as solid as the ground floor was unfortunately, so we elected to reinforce the existing joists. The existing joists were very skinny and hardly chased into the walls. Rather than chase the new joists into the stone walls, we decided to double up the timber studs so that they could support the joists and transfer the load down onto our new reinforced concrete floor slab. We had a large shower tray to install upstairs, so did not want a floor that flexed or moved.

We plan to have a large sink in the utility room, so will consequently also need a mechanical extract fan. Getting the drain and extract duct out through our 600mm thick walls took some doing, but we got there in the end. We had hoped to use extract fans with built in heat recovery, but the ducts aren’t long enough for our wall thickness and can’t be extended like they can with standard extract fans.

The cupboard was tight fit for the plumbers who installed the heat exchanger, so hats off to them for getting it in and tested. Sadly, we can’t fully commission it yet, as we don’t have radiators or underfloor heating quite ready. We are one step closer to that hot shower though! 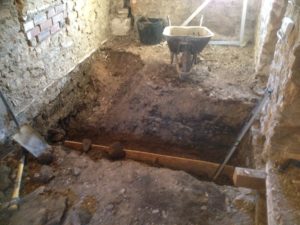 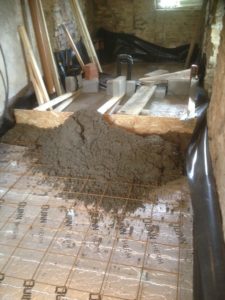 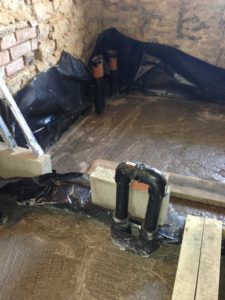 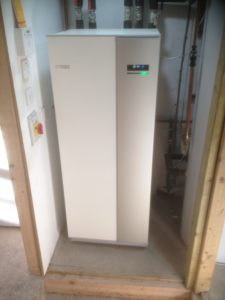 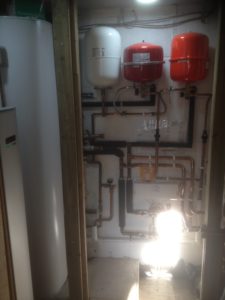